The following roads are owned and maintained by the state: 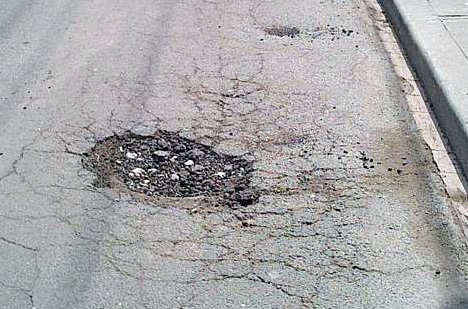 Most potholes are formed due to fatigue of the road surface. As fatigue fractures develop they typically interlock in a pattern known as crocodile cracking. The chunks of pavement between fatigue cracks are worked loose and may eventually be picked out of the surface by continued wheel loads, thus forming a pothole.

The formation of potholes is exacerbated by low temperatures, as water expands when it freezes to form ice, and puts greater stress on an already cracked stretch of pavement or road. Once a pothole forms, it grows through continued removal of broken chunks of pavement. If a pothole fills with water the growth may be accelerated, as the water "washes away" loose particles of road surface as vehicles pass. In temperate climates, potholes tend to form most often during rainy spring months when the subgrade is weak due to high moisture content, causing sinkholes and corroded sewer pipes. However, potholes are a frequent occurrence anywhere in the world, including in the tropics.

Potholes can grow to feet in width, though they usually only become a few inches deep at most. If they become large enough, damage to tires and vehicle suspensions occurs. Serious road accidents can occur as a direct result, especially on motorways where vehicle speeds are greater. Potholes are frequently almost invisible to road users.